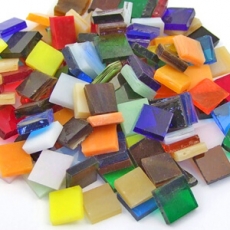 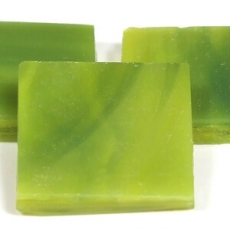 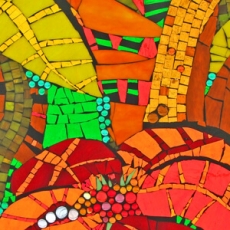 Glass tiles were probably the first objects Louis Comfort Tiffany ever designed, these date back to 1878, the year Louis Tiffany founded his first company, Louis C. Tiffany & Co. Associated Artists, an interior design company. At the same time, mass production of tiles began at the Heidt Glass Works in Brooklyn, New York. Later, when Louis Tiffany founded his own glassworks in Corona, New York in 1892, tile production was moved there.

A large number of tiles were used for decoration in the rooms designed by Tiffany, but many were also sold on the open market, although a surprisingly large number of unsold tiles existed until the 1950s. In 1957, for example, furniture designer Edward Wormley found enough unused tiles to fit them into a complete set of tables he designed for the Dunbar Furniture Company.

The original tiles were manufactured in two sizes at the time: 3 square and 4 inch square. The first tiles were produced in 3 inch sizes and were in plain, iridescent colours or iridescent swirls. Later tiles, especially in the 4 inch size, had iridescent shiny surfaces like Tiffany's art glass today.